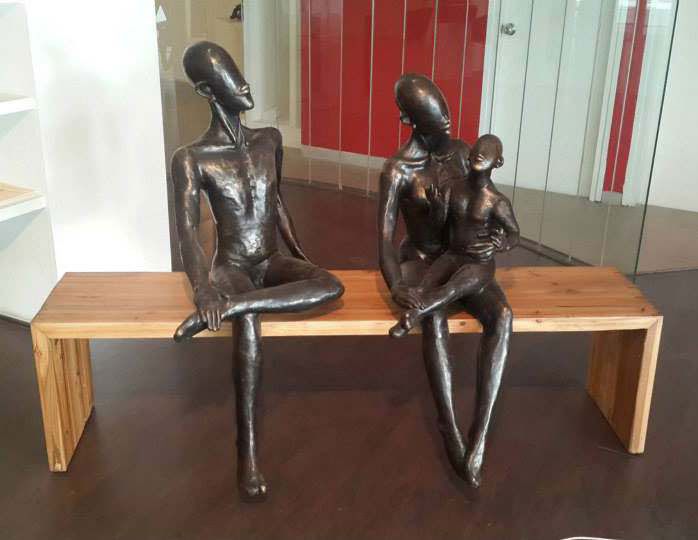 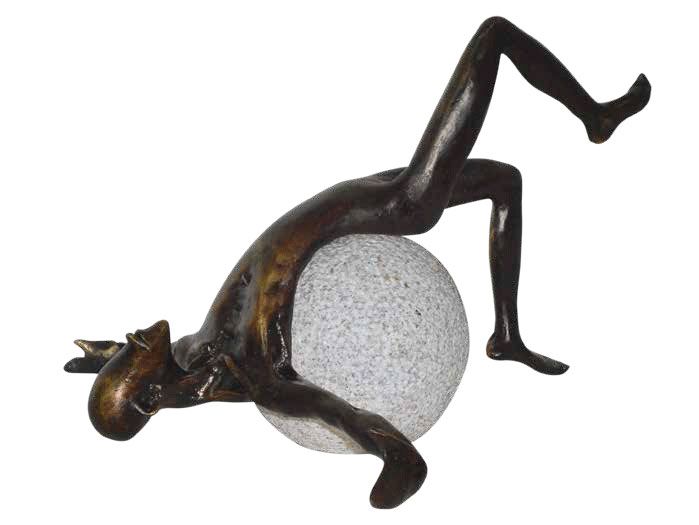 Dimpy menon
On The Ball

Dear Friends, Greetings! It is the festive season now and I am happy to bring to you this delightful show titled ‘Resonance’, a solo show by Dimpy Menon at Gallery Art Positive. Resonance, meaning reverberation or echo actually talks about things that are present continuous. Dimpy introduces us to the potential in her figures that is at once tense and relaxed. It is the moment that is both the high point of motion and the beginning of stillness or vice versa. This balance is at the heart of her sculptures. Her bronzes exemplify not just dancers or acrobats, but movement and dynamism at its best. There is a unity which integrates dance, dramatic action and artistic rendition. Dimpy s works easily becomes a part of any landscape or sometimes crafts a theatrical drama in the space it is kept. Her works are allegorically replicating the theme like a long, philosophical poem. Through simplicity and true life staging, these bronzes will combine the most contemporary techniques with deep perception into psychological imagery.It has been a pleasure working with Dimpy Menon and I am thankful to her for her imaginative and ingenious contribution. The sculptures are indeed a collector’s delight, which I am happy to share with you through this exhibition and the accompanying catalogue. I hope you will enjoy this show as much as we have in putting it together. Cheers Anu Bajaj.

There is a meditative quality to Dimpy Menon’s works arising out of a stillness that characterizes prayer, like the stillness at the eye of a storm. Although it is the human body that tells the story, the subtext of such poetry in motion is this stillness. For Dimpy Menon’s philosophy of movement is equally a philosophy of the moment. Among its elements - since we are talking of the human body - there is grace, contortion, gentleness, abruptness, delicacy, control, and a slew of possibilities. This last is significant because Dimpy’s sculptures deal in processes rather than products. There is no finality. It is as if once the viewer turns away, the figures will continue on their way only to quickly assume their original stances when he looks again. The figures arrest your attention in the midst of distraction - some subtly, by appearing to relax on a seat when, for all we know, they might have just arrived there in a rush; others more obviously as in the act of falling. Quiet relaxation is at the other end of intense movement, and a part of it In Dimpy’s world, things just are. The works are remarkably non-judgmental; they stand for themselves and whatever the viewer makes of them. They do not arrive pre-packaged and demanding a particular set of reactions. It is a testimony to our collective consciousness that viewers often see in the works what the artist intends them to see; it is as much a tribute to the artist’s instinct for finding the common humanism that drives us all. What is intensely private thus becomes universal. This is another version of the play of forces that results in the balance here. Taken singly and in groups, the bronzes tell stories. The figures capture the moment just before something happens, or the moment just after the action. At either end of motion is stillness. The bronzes celebrate life, capturing the human form in an array of movements: complex, acrobatic and graceful. They are a tribute to the fleeting moments that resonate in our minds like a line of poetry or a bar of music. The rough granite bases play off against the metal, enhancing the richness of the bronzes Dimpy Menon, the memorialiser of the moment is equally the memorialiser of movement.Both are eternalized in the same work, and it is this balance, ultimately, that makes her bronzes unique. “The more you do,” says Dimpy, “The more there is to do.” Artists, poets, composers have all discovered this for themselves through the ages.